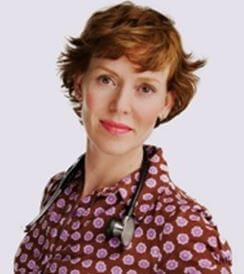 In 1998 I was approached by Lucy Hume, Director of Stonehenge, to set up access to primary care for the residents of Stonehenge. Many of the residents struggled with chronic addiction and were very unwell physically; many lacking any contact with physicians and a large portion without doctors at all. Trips to the Emergency Department were constant and, with the long waits, very challenging for both the resident and the accompanying staff.  The aim was to set up an on-site ‘clinic’ that would operate out of the rural facility on Wellington Road 124.

For many years, I had been working in public health – primarily in infectious disease, though my training was as a family physician. My training and interest were a good fit for Stonehenge. For almost 3 years I ran a clinic out of the attic in Dougan Hall (the residential program was still co-ed at this point), seeing residents for a variety of medical concerns.  I diagnosed Hepatitis C and arranged for treatment and also saw quite a bit of tuberculosis.  But mostly I did preventive care; Pap tests, blood work, blood pressures, and took care of persistent issues.  For many of the residents it had been years since they’d seen a doctor.

This was a new and innovative approach at that time – having a doctor on site within the program at Stonehenge – providing concurrent primary care alongside addiction treatment in a community setting. Working outside of a traditional primary care setting had its challenges.  I had very little equipment and no staff.  There were so many limitations.  I began to feel the standard of care should be better – that I owed the residents a duty of care to see to it they had access to regular primary care, not just once a week and not just while in treatment, but hopefully after they left the program should they stay in Guelph.  And so I recommended to Stonehenge’s Director that they establish a relationship with the Guelph Community Health Centre in order to provide ongoing care for the residents. This sparked the ongoing relationship with the Guelph CHC and the breadth of primary care Stonehenge has today!

My late husband, Dr. Glenn Peirson, was also approached by Lucy Hume in regard to his willingness to train to become a methadone prescribing physician for Stonehenge.  He was inspired by his work within hospice to “ease people’s pain and struggle”. He agreed, became licensed and ran the first methadone program at Stonehenge for almost a decade.  As the staff at Stonehenge would share – Glenn was a unique physician – “incredibly approachable, funny and warm”. His shorts and vest immediately set him apart from other primary care contacts that our residents had experienced, so he quickly won the most challenging folks over.  He was firm but caring and relished in the successes of his methadone clients.

Glenn touched hundreds of people in his practice for many years until he died from cancer at the age of 44 in 2009.  Even when he was gravely ill he continued to work at the methadone clinic because he was passionate about the work and the difference it was making in the lives of those residents.

Stonehenge history has been ‘gifted’ by the involvement of both Dr. Mary Peirson and Dr. Glenn Peirson for over a decade. Their willingness to pioneer innovation in primary care and addiction treatment and foster long lasting partnerships within the Guelph community set the course for our success today. Many thanks.