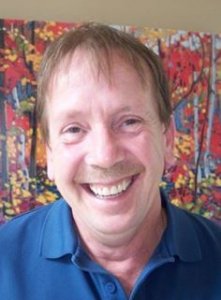 All of my life I have struggled with addiction and mental health issues. I was raised by ‘the system’ after being taken from my parents by CAS due to their own addiction issues. My younger years were spent in and out of various institutions and jails; I never learned how to be a part of society. In the early 80’s I was sentenced to 10 years in a penitentiary. I was day-paroled to Stonehenge Therapeutic Community in 1988. I agreed to treatment to get out of the violent prison atmosphere and sometime during my stay at Stonehenge, I changed.

I took the tools that I learned at STC and incorporated them into my new way of living. I went back to school, got married and kept out of trouble for years, until my phone rang on May 25th, 2003. It was my daughter Robin Lee calling to tell me that my son Sean had died. Sean was 20 years old. He had fallen to his death from the underside of a bridge. I picked up dope that day and a few days later I drove to New Brunswick for my son’s funeral – a funeral that I don’t really remember because of the drugs I took to numb the pain; numb everything.

I used hard for 6 years and overdosed a number of times, but was always fortunate to be around someone who knew what to do to bring me back. I pushed everyone away who cared for me, including my daughter. It was as though I lost both of my children that day. I used non-stop until I lost everything and everyone. I could no longer be trusted. I hated myself and figured the worst that could happen was that I would end up with my son. I gave up on myself.

Quite by accident, I ran into a man who had previously worked at STC back in 1988. He was now part of the Homicide Investigations Unit with the Waterloo Regional Police Service. The second time we spoke, he told me I’d better pick up the phone before it was too late – make the call and go back to Stonehenge.  I made the call, and after checking in every week for many months, I got word that a bed had opened up for me.  I arrived at STC again in June 2009 and I’ve been drug and alcohol free ever since.

Today I am 7 years drug & alcohol free. I am an active member of the STC Alumni and the STC Board of Directors.  I have a great job and have earned the confidence of the company owner and my peers. My recovery has helped me to build a life and a career that has opened doors that I never knew existed. I purchased a new vehicle earlier this year and am considering a mortgage for my first home.  I recently returned from participating as a speaker in a 12-Step Convention in Cartagena, Colombia.

I give credit to the life I have today to Stonehenge for giving me another chance to live the life I deserve as a contributing, tax-paying and voting member of society. Thank you to the many people in the front lines and behind the scenes that make the STC machine work. You’re saving lives…..